The Work Package WP5 aims at developping a hyperspectral imaging system by drone. Indeed, hyperspectral imagery has an important potential for environmental research, be it the study of the atmosphere, the soils, the biomass, or the continental and coastal waters.

Compared to satellite or airborne imagery, UAV platforms allow for finer resolution, while offering greater flexibility and a more moderate cost. Lightweight, compact hyperspectral cameras that can be embedded on drone are now available. At present, the majority of these sensors is based on a push-broom technology, which is hardly compatible with the unconstrained movements of a drone. The acquired data must therefore be geometrically corrected so that a hyperspectral cube can be generated. 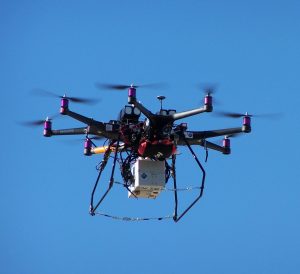 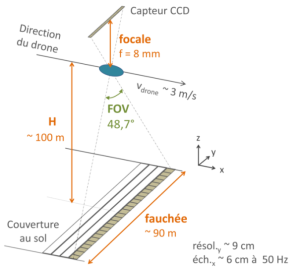 HyperDrelio is equipped with a MicroHyperspec® (Headwall®) hyperspectral camera with a VNIR sensor (400-1000 nm) recording 250 bands with a spectral resolution of 1.85 nm. This compact camera (770 g) is based on pushbroom technology. The image is therefore acquired line by line as the displacement progresses. In parallel with the hyperspectral acquisition, RGB photographs are acquired by an iDS© uEye camera. The drone is also equipped with position and attitude sensors (differential GPS RTK and inertial center) allowing a posteriori to correct geometrically the hyperspectral data.

From the RGB photographs, an ortho-image and a Digital Terrain Model (DTM) of the area are generated. An algorithm is developed in order to couple the data from the different proprioceptive sensors and the information on the topography of the zone (DTM) and thus to recalibrate the hyperspectral lines with respect to each other, but also to georeference them. 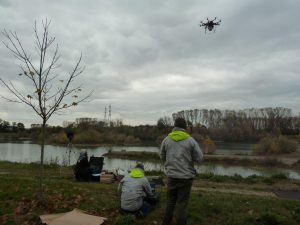 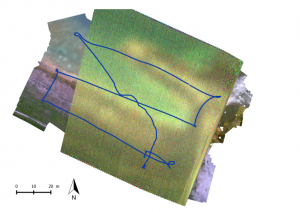 Once the data is geometrically corrected and calibrated spectrally, a hyperspectral cube is constructed. It is a 3D representation of a zone, the third dimension representing the spectral information for each of the recorded spectral bands. 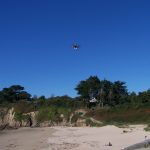 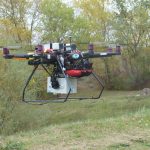 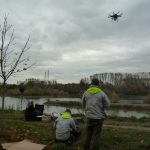 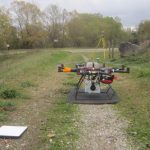 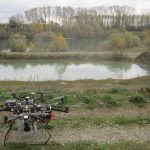 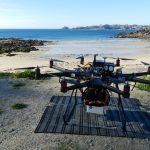 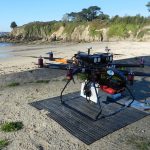 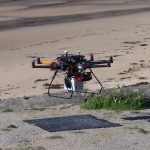