The in situ characterization of transport processes in fractured media is particularly challenging due to the considerable spatial uncertainty on tracer pathways and dominant controlling processes, such as dispersion, channeling, trapping, matrix diffusion, ambient and density driven flows. We attempted to reduce this uncertainty by coupling push-pull tracer experiments with single-hole ground penetrating radar (GPR) time-lapse imaging. The experiments involved different injection fractures, chaser volumes and resting times, and were performed at the fractured rock research site of Ploemeur in France (H+ network, hplus.ore.fr/en). For the GPR acquisitions, we used both fixed and moving antenna setups in a borehole that was isolated with a flexible liner. During the fixed-antenna experiment, time-varying GPR reflections allowed us to track the spatial and temporal dynamics of the tracer during the push-pull experiment. During the moving antenna experiments, we clearly imaged the dominant fractures in which tracer transport took place, fractures in which the tracer was trapped for longer time periods, and the spatial extent of the tracer distribution (up to 8 m) at different times. This demonstrated the existence of strongly channelized flow in the first few meters and radial flow at greater distances. By varying the resting time of a given experiment, we identified regions affected by density-driven and ambient flow. These experiments open up new perspectives for coupled hydrogeophysical inversion aimed at understanding transport phenomena in fractured rock formations. 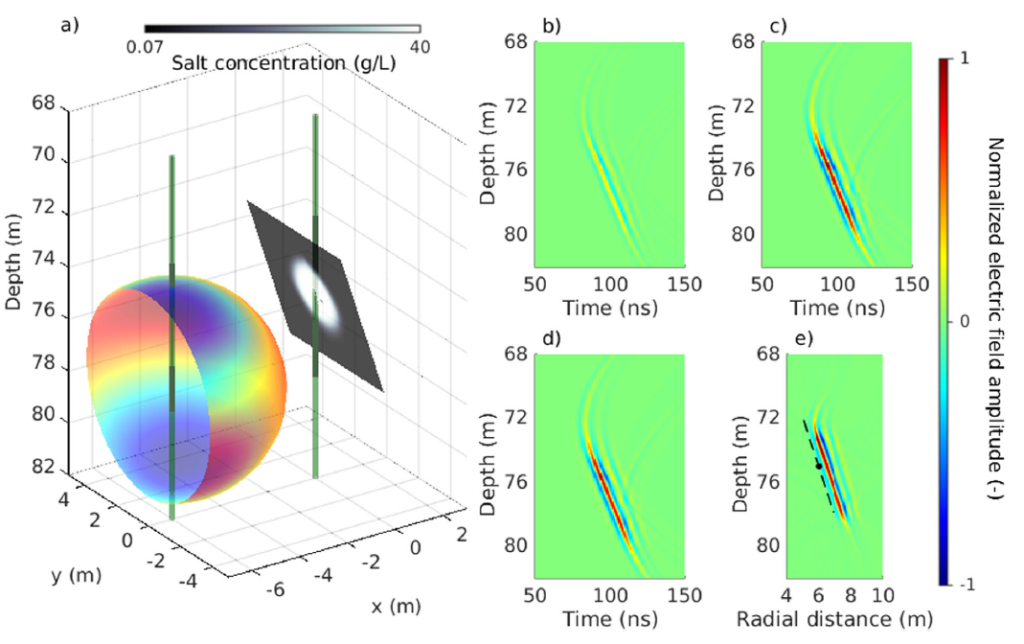 (a) A synthetic 3-D model with the electric field and the tracer concentration in a fracture at a given time.
(b) The simulated GPR section with formation water.
(c) The same section with the tracer distribution (shown in Figure 3a).
(d) Their difference and the migrated difference section, along with the fracture location and injection point (e).
The GPR simulations were performed with a newly developed algorithm [Shakas and Linde, 2015] and the flow-and-transport simulation was done with MaFloT 2-D.