Diagram illustrating the Okada-based model used in this study:
a) Vertical displacement at the ground surface is obtained by uperimposing the analytical solution of Okada [1985] for two different dislocation planes (red and blue surfaces). The red plane represents a sub-vertical fault zone and the blue plane mimics the effect of vertical pressure applied on the aquifer’s confining unit. The associated vertical displacements on a surface cross-section are shown by the red and blue curves respectively, along with the summed contribution of both planes in green (displacement are largely exaggerated). Tilt can be recovered anywhere by taking the local gradient of vertical displacement: in this case along the x direction.

Fractured aquifers which bear valuable water resources are often difficult to characterize  with classical hydrogeological tools due to their intrinsic heterogeneities. Here we implement ground surface deformation tools (tiltmetry and optical leveling) to monitor groundwater pressure changes induced by a classical hydraulic test at the Ploemeur observatory. By jointly analyzing complementary time constraining data (tilt) and spatially constraining data (vertical displacement), our results strongly suggest that the use of these surface deformation observations allows for estimating storativity and structural properties (dip, root depth, and lateral extension) of a large hydraulically active fracture, in good agreement with previous studies. Hence, we demonstrate that ground surface deformation is a useful addition to traditional hydrogeological techniques and opens possibilities for characterizing important large-scale properties of fractured aquifers with short-term well tests as a controlled forcing. 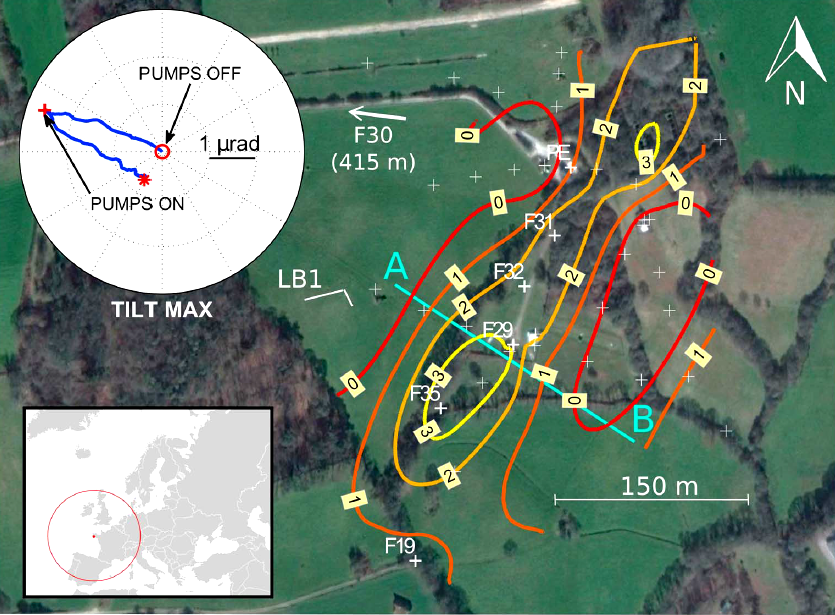 The Ploemeur experimental field. Lower inset: Geographic location; upper inset: direction of maximum deformation through time recorded at the long baseline tiltmeter station (LB1). This station consists of two nearly orthogonal hydrostatic tiltmeters installed in an underground bunker and attached to the granitic bedrock. The LB1 tiltmeters are here represented by the white stripes. Central image: satellite image and isocontour lines of kriged vertical deformation, given in millimeters. The associated error for vertical displacements varies from 1.0 to 1.5 mm across the field. The smallest errors are located along the A-B profile. All white crosses are the node points where leveling measurements were performed. Many of these points coincide with the location of wells, among which the three pumping wells (PE, F31, and F29) and other monitored wells (F32, F35, and F19). Well F30, located at a few hundreds of meters west from the pumping site, was used as the nonmoving reference point for the least squares adjustment of the optical leveling data.