When applied to hydrogeology, seismicmethods are generally confined to the characterisation of aquifer geometry. The joint study of pressure- (P) and shear- (S) wave velocities (VP and VS) can provide supplementary information and improve the understanding of aquifer systems. This approach is proposed here with the estimation of VP/VS ratios in a stratified aquifer system characterised by tabular layers, well-delineated thanks to Electrical Resistivity Tomography, log and piezometer data. We carried out seismic surveys under two hydrological conditions (high and low flow regimes) to retrieve VS from both surface-wave dispersion inversion and SH-wave refraction interpretation, while VP were obtained from P-wave refraction interpretation. P-wave first arrivals provided 1D VP structures in very good agreement with the stratification and the water table level. Both VS models are similar and remain consistent with the stratification. The theoretical dispersion curves computed from both VS models present a good fit with the maxima of dispersion images, even in areas where dispersion curves could not be picked. Furthermore, VP/VS and Poisson’s ratios computed with VS models obtained from both methods show a strong contrast for both flow regimes at depths consistent with the water table level, with distinct values corresponding to partially and fully saturated sediments. 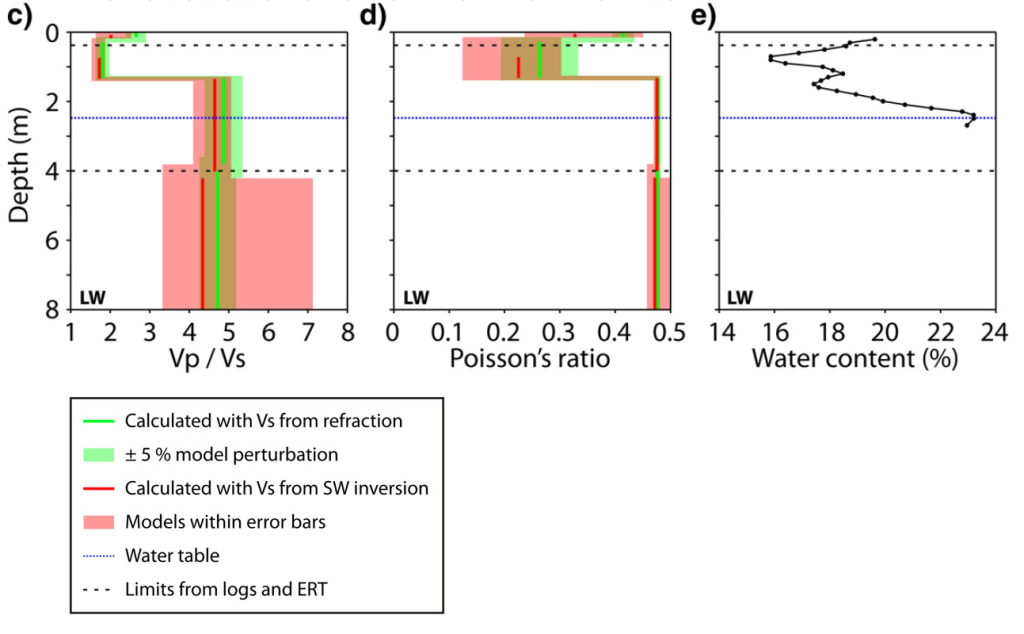 VP/VS (c. for LW) and Poisson’s ratios (d. for LW) computed with VS models retrieved from SH-wave refraction interpretation (in green) and surface-wave dispersion inversion (in red). In any case, VP/VS and Poisson’s ratios are computed with VP retrieved from P-wave refraction interpretation. (e) Water content measurements performed on auger sounding samples collected during the LWcampaign (soil samples could not be collected during the HWcampaign due to unfavourable weather conditions).